Throughout the process of creating my music video, I have used different media technologies to aid me throughout all the different stages which were:

Throughout the research stage of creating my music video I used different media technologies to find out what music videos and are and to find existing examples. One way in which technology has helped me in the research stage is by using websites such as YouTube where I watched existing music videos which helped me to see the three different types of music video. By doing this it would then help me in the planning stage. I also used YouTube to watch documentaries about different music video directors. One of the documentaries I watched was the ‘Mirrorball’ documentaries in particular the one about Jonathan Glazer. I found that it helped me because I found that Glazer specializes in concept videos which is the type of music video I wanted to create. As well as YouTube, I did use the website ‘Wikipedia’ to help my understanding of the different types of music video. Although I did find it helpful I did find that it may not be fully reliable because anyone can edit Wikipedia which can make it inaccurate.

Throughout the construction stage of creating my music video, different media technologies helped me to make a professional looking media product. One of the main technologies that was involved in the construction stage is the quality of digital cameras and editing software available. This is because high end almost professional standard cameras and software are available which means that amateur music video directors can record and then edit their work. During the editing process I used the software ‘Final Cut Pro’ which is a software used by professionals which is seen as advantage as I was able to make a professional looking video which worked as one of the comments about my video was that it looked professional. During the construction process of the two ancillary products, the digipak and the magazine advert, I used Adobe’s Photoshop software which enabled me to edit the pictures for the digipak and advert and then arrange them into a good layout.

New technologies have helped me in the evaluation of my music video. The main way in which technology has helped me to evaluate my work is the way I could get feedback from people from my target audience. I have found that due to the internet it was easier to find out what people from my target audience think of my music video. This is by posting my videos onto social networking sites such as Facebook and Twitter and on the video sharing website YouTube. One way in which this is an advantage is because I can ask more people from my target audience for feedback on what they thought of the music video because anyone in the world can see it which means I can get more feed. From doing this I have found that with new technologies like the internet producers can get feedback on their products quicker which in the industry can make a big difference.

Today I started to edit the first draft of my music video from the comments I recieved about it. I have edited it by making the character in the second verse just act the words and not lip sync as my target group thought that it was just repeating what had gone on in the first verse. 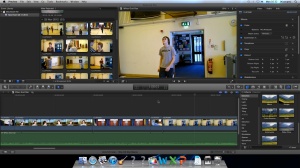 During this process I had to match the singing by the actor in the scene with the music to give a good sense of continuity to the video. During the editing process I did not use any post production effects this is because I thought that tey would distract from the music and the true meaning of the song and would make it more personal and intimate

Today I started to edit my music video. The sotware I used is called Final cut pro. After first inporting the footage I then started to choose the parts of each clip and then stabilize them. This is because it would make a better finished product because although I did use a tripod there was still some movement. The cuts I will use will be mainly stright cuts as I think fades or dissolves may distract from the actual picture on  screen. 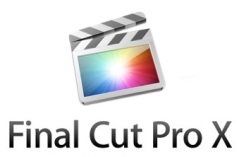 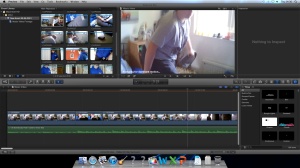